In 2023, the Illinois Railway Museum will celebrate 70 years as an organization. On January 21st, festivities will kick off when IRM will commemorate 60 years since the abandonment of the Chicago North Shore and Milwaukee Railroad, an electric interurban which ran between its namesake cities from 1908 until a frigid cold January 21st, 1963. The "North Shore Line", as it was known, offered fast hourly trains from the Loop in downtown Chicago to downtown Milwaukee, as well as intensive commuter service through the North Shore suburbs to Mundelein and Waukegan. The railroad prided itself on its personal service, and even offered parlor and dining services on many trains. It was the home of the famed Electroliners, a pair of electric articulated streamlined trains bought by the railroad in 1941. The railroad had a charm about it which attracted many railfans, who mourned its passing in 1963.

The following cars are expected to operate:

On display will be:

The Electroliner may operate briefly, but this is not guaranteed at this point in time. It will otherwise be on the display at the 50th Ave 'L' station.
All operations are pursuant to weather and mechanical conditions of the day. 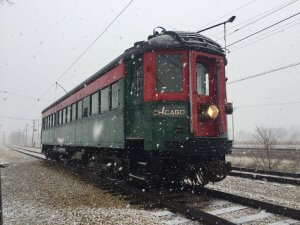 Your ticket for the: North Shore Line Day