The Illinois Railway Museum is pleased to announce that it has acquired Janesville (Wisconsin) Transit System 433, a diesel bus built in December 2001. The bus is a model D35LF constructed by New Flyer of America in St. Cloud, Minnesota as part of an order of seven buses. These replaced part of Janesville’s first all-new bus fleet bought in 1979, from which JTS donated bus 412 to IRM when it was retired in 2002. New Flyer’s low-floor models were the first and largest-selling early low-floor bus type in the North American market. JTS 433 is the newest motor bus in the IRM historic collection and represents the changeover to low-floor buses that occurred in the early 2000s.

In 2002 and 2006, more New Flyer D35LF buses joined the first seven in Janesville, making 17 in all. All but a couple of the 2006 models have been retired at this point, replaced by Gillig low-floor units. IRM’s bus 433 is powered by a Cummins ISC 8.3 liter diesel engine and has a Voith four-speed automatic transmission. Its air conditioning works well and the largely original interior is in excellent condition. JTS Operations Supervisor David Kipp worked with IRM and JTS management to arrange for 433’s selection and donation, and kindly volunteered to drive the bus to the Museum. It arrived on October 18, 2020. 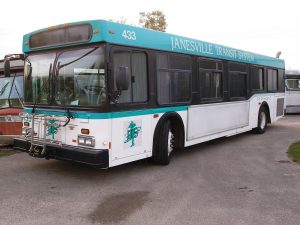 Your ticket for the: IRM acquires low-floor bus from Janesville