Union, IL – The Illinois Railway Museum (IRM) is pleased to announce that it has acquired the historic Pullman private car Pawnee. The car arrived at the museum on its own wheels on Thursday, December 12th. This historic railroad car was built in 1930 and is the second-to-last traditional “heavyweight” private car ever built by the Pullman Company of Chicago. The museum is raising funds to cover the acquisition and transportation of this car to IRM as well as the long-term housing and restoration of the car (click here for more information).

The Pawnee was built for Harry Payne Bingham, a financier, sportsman, and philanthropist. Bingham’s father was the president of Standard Tool Company in Ohio. His maternal grandfather was Henry Payne, U.S. Senator from Ohio between 1885 and 1891, while his paternal grandfather was William Bingham, president of the Cleveland Iron Company. Harry Bingham lived in New York City and was an acquaintance of John D. Rockefeller and Henry Flagler, the latter a heavy investor in real estate in Florida.

Bingham ordered the Pawnee from Pullman for deluxe private transportation between New York City and Palm Beach in Florida. Later on in the car’s life, after it was sold by the Bingham family, it was refurbished by Pullman as Western Union Telegraph Company number 100.

The Pawnee is in excellent and largely original condition. It will be a standout addition to the Illinois Railway Museum’s collection of historic railway cars, representing the “last hurrah” of golden-age luxury rail travel by the moguls of industry and finance before the advent of the jet age. The museum intends to restore the Pawnee and operate the car on its demonstration railroad. Fundraising is underway to pay for the car’s transportation to IRM’s campus in Union. Click here to donate towards the preservation of this historic car. 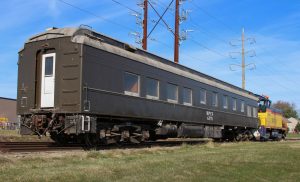 Your ticket for the: Museum acquires private car Pawnee