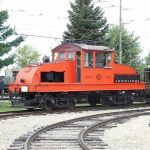 Charles City Western 300 is the only preserved electric locomotive built by the McGuire-Cummings Manufacturing Company of Chicago. It is a “steeplecab,” with a cab in the center of the locomotive and sloping hoods on each side to provide good visibility in either direction for the engineer. It was used in freight service on the CCW in central Iowa until retired and sold to IRM in the 1960s. It was completely restored during the 2000s and 2010s.

FUN FACT: The cab on CCW 300 isn’t square; it’s slightly off-kilter. This is due to a major wreck the engine was involved in during the 1920s which partially demolished its cab. Fortunately nobody was killed.

COMPARE ME WITH: Illinois Terminal 1565, an electric locomotive built in 1910. IT 1565 is a “box cab,” rather than a steeplecab, so instead of a central cab and sloped hoods it has a full car body for its entire length and the motorman is positioned at the end of the locomotive.

Your ticket for the: Charles City Western 300