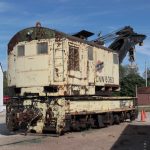 Chicago & North Western 6363 is a diesel-powered crane, known as a “wrecker,” designed for heavy-lift applications. Cranes like this are known as wreckers because they were often used for lifting locomotives and cars that had derailed in a wreck. This crane cannot move itself and a locomotive would have hauled it to and from the work site.

This crane is the only Bucyrus Foundry & Manufacturing Company product at IRM. Bucyrus dates back to 1880, when it got its start in Bucyrus, Ohio, building steam-powered shovels and cranes. Not long thereafter, it relocated to South Milwaukee, Wisconsin, in 1893. In the early 1900s, it famously built a number of huge steam shovels that saw use in excavating the Panama Canal. A famous photo of President Roosevelt operating a steam shovel in Panama in 1906 depicted a Bucyrus shovel. Then in 1927, Bucyrus merged with the Erie Steam Shovel Company, which specialized in smaller steam-powered cranes and shovels, to form Bucyrus-Erie. The company continued to build shovels, cranes, and mining equipment until Caterpillar acquired it in 2011.

Your ticket for the: Chicago & North Western 6363