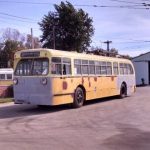 Trolley buses in Dayton, Ohio, have a long and rather unusual history. One of six private streetcar companies in the city, the Dayton Street Railway Co., suffered a car barn fire in 1932 that destroyed most of its fleet. It borrowed cars from other companies to get by, but falling revenues during the Depression and worn-out tracks caused them to seek another means of resuming normal service. Indianapolis, Indiana, began trolley bus service on one line shortly after that fire, and DSR’s management took notice. The first DSR trolley bus entered service on April 23, 1933. During the next decade, most of the other streetcar companies also converted to trolley bus, until there were five separate operators in 1941. Consolidation under City Railway Co., later renamed City Transit Co., brought them together as one operation.

The consolidated company made its first large purchase of new trolley buses in 1947. This order of 45 vehicles, including bus 435, was bought from Pullman-Standard and built in their Worcester, Massachusetts, plant. They were equipped with General Electric controls and traction motors. They were followed by trolley buses built by Marmon-Herrington, and in the 1950s and 1960s, by used trolley buses from other cities which had abandoned service. Dayton’s transit operation was profitable, with a majority of their fleet being trolley buses, and remained in private hands until 1973. Bus 435 was retired just after the Miami Valley RTA took over operations, and was stored until 1976 when it came to IRM. It is complete and operable, and awaits restoration so that it can be placed in service on our demonstration line.

Your ticket for the: City Transit 435