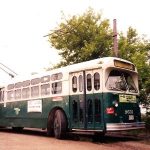 Chicago’s trolley bus system, for the 43 years it lasted, provided vital transportation through the streets of the city. Even though it mainly served the Northwest Side with a few lines on the Near South Side, it had the largest fleet of trolley buses in the country. And even though it never came within a half mile of the Loop, it carried enough passengers that some routes needed intervals between buses of less than a minute during rush hours.

CTA’s last order of 349 trolley buses was also the largest quantity of them that had ever been bought from any builder, and no larger order has been placed since. Bus 9631 is one of those 349, and its sister 9553 is also preserved here at IRM. It was built by Marmon-Herrington in Indianapolis, Indiana, who had only produced their first trolley bus in 1946, but their product quickly outsold all other builders’ trolley buses. Marmon’s design was lightweight and strong, using the aluminum skin of the bus to stiffen the structure. Other manufacturers relied on a heavy steel frame, and moving all that extra weight consumed more electricity and cost more money to operate.

Bus 9631 was assigned to the North Ave. Garage at North and Cicero Aves. for its entire service life. When Chicago abandoned its final trolley bus routes on March 25, 1973, bus 9631 was already chosen for preservation. It ran on a final excursion on April 1, and came to IRM on July 11. Among its sister buses, 124 were sold to Guadalajara, Mexico, where they continued in service until the early 1990s.

Bus 9631 is complete and operational. You may ride it occasionally on IRM’s demonstration trolley bus line.

Your ticket for the: Chicago Transit Authority 9631