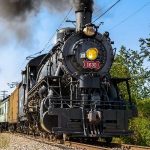 St. Louis – San Francisco Railroad (“Frisco”) 1630 is the museum’s most famous steam engine. A “Russian Decapod,” it was built in 1918 for export to Russia but was embargoed when the Bolshevik Revolution took place. Instead the newly-completed engine was sold to the Frisco, which used it in both freight and passenger service into the 1950s. It was then sold to Eagle-Picher Mining and saw use hauling freight and aggregate trains until the mid-1960s.

FUN FACT: Look closely at the front of the engine under the smokestack and you’ll see builder’s plates in both English and old-style Cyrillic – a holdover from the engine’s intended destination of Imperial Russia.

COMPARE ME WITH: Illinois Central 3719, a large 2-6-0 freight engine built 18 years earlier than Frisco 1630. The IC engine has much higher axle loading, meaning it needs more substantial track on which to run than does Frisco 1630, an engine designed to operate on Imperial Russia’s lightweight track. However the IC 2-6-0 has nearly the same tractive effort as the Frisco engine.

Click here to support the continued operation of Frisco 1630

What was the Frisco?

This engine is IRM’s only piece of equipment from the St. Louis-San Francisco Railway, universally known as the Frisco. The Frisco dates back to the 1870s, when it began as a branch of the Pacific Railroad, and it quickly expanded to encompass a network of lines centered around Missouri and Oklahoma (then known as the Indian Territory). It included lines from a hub in Springfield, MO, to St. Louis and Kansas City, MO, Tulsa and Oklahoma City, OK, Dallas, TX, Memphis, TN, Mobile, AL, and Pensacola, FL. For a time in the early 1900s it also controlled the Chicago & Eastern Illinois, and with it an entrance to Chicago. Despite its name, though, it never got closer to San Francisco than northern Texas.

During the 1950s the Frisco converted to diesel power like most other railroads. It remained independent until 1980, when it was merged into the Burlington Northern.