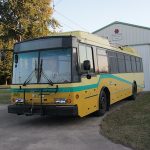 During the 1990s, the fall of the “Iron Curtain” led some Eastern European firms, which had largely only sold to other Communist countries, to seek new business in the West. In the Czech Republic, Škoda, a large industrial conglomerate, was known for its trolley buses, trams, and railway equipment. It saw a market in North America for trolley buses, particularly considering that most of the existing trolley buses here dated from a short period in the 1970s and were wearing out. (See Toronto 9339, also in our collection, for more information on why this was.) Škoda joined with defense contractor AAI, based in Maryland, to create a new company called Electric Transit, Inc. which would market Škoda’s model 14Tr and 15Tr trolley buses.

Dayton, Ohio, and San Francisco purchased fleets from ETI, with Dayton buying 57 units and San Francisco 273. They had effective air conditioning, important in Dayton’s climate, and battery auxiliary power units permitting slow maneuvering around a road closure or overhead wire problem. Structural and rust problems heavily affected the fleet through their lives, and they were not considered particularly successful. ETI withdrew from the market in 2004.

Dayton’s ETI fleet was replaced with new trolley buses beginning in 2019, although a substantial number of the ETI buses had been retired for some years. The last unit to operate in revenue service was our bus 9809, on December 9, 2019. The GDRTA donated it to IRM, and it arrived in May, 2020. It is complete and operable.

Your ticket for the: Greater Dayton Regional Transit Authority 9809