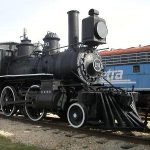 Illinois Central 201 is the oldest steam engine preserved at IRM and the only standard-gauge 2-4-4T engine preserved anywhere. It was built for suburban passenger service, hauling commuter trains south out of Chicago, and remained in this role until the IC electrified its commuter operations in the 1920s. At that time it was retired and kept by the railroad as a museum piece.

FUN FACT: This may be the only engine still around that was run by the famous Casey Jones. Jones worked for the IC in Mississippi, but during the 1893 World’s Fair in Chicago he temporarily worked on commuter trains running to the site of the fair in Jackson Park. It’s very likely – though not certain – that he would have run this engine at some point during the fair.

Your ticket for the: Illinois Central 201