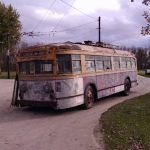 The start of the Great Depression came at a particularly bad time for Indianapolis Railways: it needed to make some large expenditures soon to replace worn-out streetcar tracks, and decreased ridership caused by the poor economic conditions limited their revenue. In 1932, following other cities’ lead, they chose to convert one of their streetcar routes to trolley buses to avoid the cost of track replacement. The fifteen trolley buses they needed were ordered from Philadelphia-based Brill, the country’s largest streetcar builder.

Quite pleased with the performance and economical operation of their first trolley buses, Indianapolis Railways ordered 80 more for delivery in 1934, including this bus. This large order was a welcome source of work and income for Brill, coming in the depths of the Depression. The new vehicles resulted in a 21% increase in ridership over the streetcars they replaced. The trolley bus fleet was steadily enlarged over time, and when this bus was retired in 1954, there were 205 trolley buses in service.

Indianapolis Railways promised bus 527 to the Museum of Transportation in St. Louis when it was retired, and it received a full paint job before it left. Outdoor storage for 30 years took its toll, and the bus was in rough condition when it was finally stored indoors in 1986. Upon arrival at IRM in 2015, volunteers found that another number had been painted on the bus before the final paint was applied. It turned out that the bus marked “527” for so many years was actually number 568. The reason for this swapped identity is not known.

This is the only surviving Indianapolis trolley bus. It is complete, but not yet restored to operation.

Your ticket for the: Indianapolis Railways 568