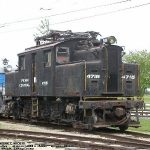 Penn Central 4715 is the oldest electric locomotive preserved at IRM and is known as an “S-Motor.” It was built to haul passenger trains north out of Grand Central Terminal in New York City because steam engines could not be used in the Park Avenue Tunnel. It has a “bi-polar” motor design wherein the locomotive’s main axles form the core of the motor armatures.

FUN FACT: “S-Motors” were well known due to thousands of models of them built in the 1930s by Marx and Lionel, but the real locomotives never left the New York City area in service. IRM’s locomotive, which ran for a time in Union in the 1990s, is the only one ever to have run outside of New York State.

COMPARE ME WITH: Pennsylvania Railroad 4927, a GG-1 electric locomotive built in 1942. The GG-1 was designed more than three decades after the “S-Motor” and besides having more modern styling, the PRR locomotive uses a higher-voltage AC power source and is much more powerful overall.

Your ticket for the: Penn Central 4715