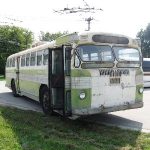 Few cities tested the ability of trolley buses to handle steep hills more than San Francisco. Considering the abnormally short lifespan of engines and transmissions in motor buses there, the city has retained trolley buses, and has the largest fleet in North America. Although service began on one line in 1935, most routes were converted from cable car or electric streetcar in the years just after World War II. By 1952, the Municipal Railway had purchased 398 brand-new trolley buses to modernize its operations, from Marmon-Herrington, Fageol-Twin Coach, and St. Louis Car. This fleet was the second-largest in the USA at the time; with the abandonment of Chicago’s system in 1973, San Francisco’s fleet became the largest in the country.

Kent, Ohio-based Fageol-Twin Coach only received orders for their post-WWII-design trolley bus from two cities, San Francisco and Detroit. However, the distinctive design sold well as a motor bus, with gasoline, diesel, and propane engines available.

Bus 614 was preserved in 1977 at the Orange Empire Railway Museum in Perris, California, and came to IRM in 2009. It is the only preserved post-war standard trolley bus from Fageol-Twin Coach, and is complete and awaits restoration to operation.

Your ticket for the: San Francisco Municipal Railway 614