The Illinois Railway Museum is pleased to announce that it has acquired one of the last traditional single-unit streetcars ever built for service in North America. This new addition to the museum’s collection allows IRM to trace the history of urban rail transport from 1859 all the way to the present day.

The streetcar is Toronto Transit Commission number 4034, a CLRV (Canadian Light Rail Vehicle) built in 1979 by Hawker-Siddeley of Canada. The CLRV was designed in the mid-1970s as a modern streetcar that could replace aging PCC streetcars in the few North American cities that had not replaced their streetcars with buses. It was one of the last single-unit streetcars built, as newer streetcar systems have instead used multi-car articulated light rail vehicles. The CLRV was a remarkable success, with nearly 200 of the cars carrying passengers in Toronto until this year.

Car 4034 is more than 30 years newer than IRM’s next oldest streetcar, a PCC streetcar built for Chicago in 1948 and known as the “Green Hornet.” It is the only streetcar at the museum to have operated in street railway service into the 2010s. As such it represents the latest chapter in a streetcar story that starts with a horse-drawn streetcar built in 1859 and continues through cable cars, early trolley cars, and the “Red Rocket” Chicago streetcars that were so ubiquitous in the early 20th century. The museum intends to operate its CLRV in demonstration service for museum visitors following work to adapt the Toronto car to IRM’s track gauge. 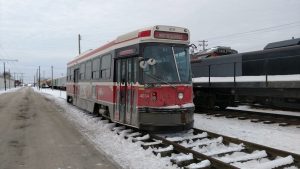 Your ticket for the: IRM acquires 1979 streetcar from Toronto