On September 17, 2019 the Illinois Railway Museum reassembled the iconic North Shore Electroliner after a three-year period of rebuilding work on the articulated train’s trucks and motors. The train’s four cars were lifted from their temporary “shop trucks” and placed on their original trucks by a crew of museum volunteers, employees, and contractors. The train is now back in one piece and ready for work to commence on an overhaul of its electrical and brake systems to make it operational.

The Electroliner is the most modern electric interurban train in existence. Designed and constructed by the St. Louis Car Company in 1941, the Electroliner was a high-speed, streamlined, articulated train designed for service between Chicago and Milwaukee over the North Shore Line interurban route. It was built to navigate the congested city streets of Milwaukee, the high-speed private right-of-way of the Skokie Valley Route, and the narrow confines of the Chicago elevated. The train was made up of four cars, with three coaches and a dining-lounge car that famously served drinks, snacks, and “Electroburgers” to riders. Only two Electroliner trains were built and both remained in service until the North Shore Line was abandoned in 1963. They were then sold to the Red Arrow line between Philadelphia and Norristown, Pennsylvania, where they were renamed Liberty Liners and ran for another 15 years.

The Electroliner at IRM is the only one of the two trains to be preserved in its original configuration. Its body was restored in the 1980s to its appearance while on the North Shore Line but motor problems sidelined the train in the 1990s. Following a major fundraising effort, the train was disassembled in 2016. Its four cars were separated and its trucks and motors were sent to outside firms for rebuilding. Now, with the entire train back together, museum volunteers are embarking on an inspection and overhaul of the train’s electrical control systems. It is intended to restore the train to operation and run it for museum visitor’s on the museum’s five-mile demonstration railroad. For more information on this project click here. 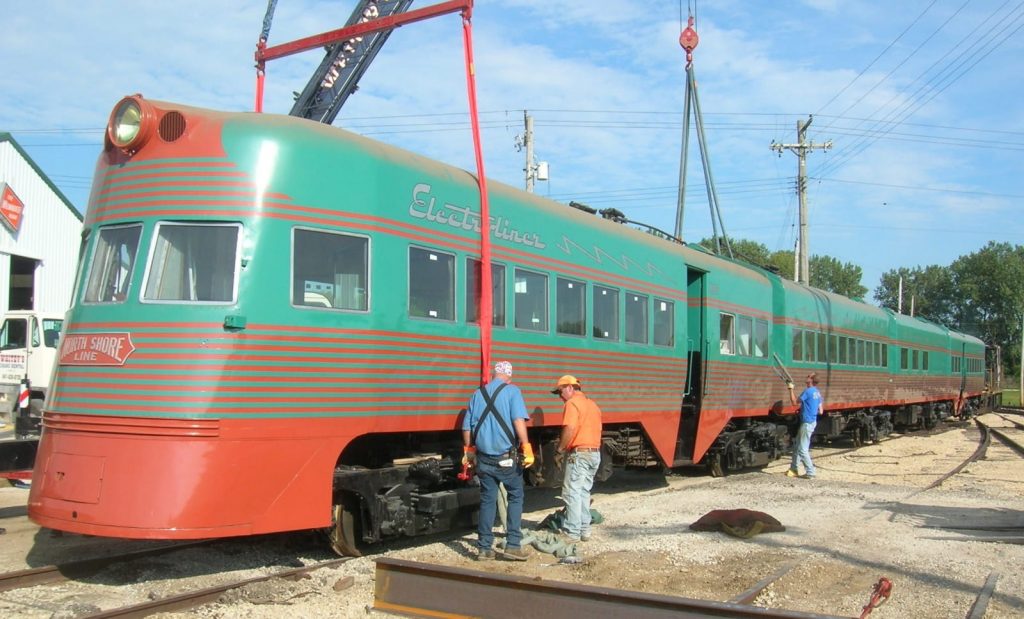 Your ticket for the: North Shore Electroliner reassembled