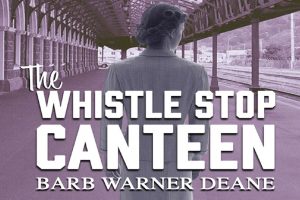 Join author and historian Barbara Warner Deane at the Illinois Railway Museum on Saturday, September 21st at 1:00pm for a historical presentation and discussion about the canteens run at railway stations across America during World War II. The presentation will center around Deane’s new book, The Whistle Stop Canteen, which will be available at a book signing following the presentation.

After Pearl Harbor was attacked, American troops started traveling across the U.S. for recruitment, training, and deployment. Most servicemen had never been far away from home and certainly not on an over-crowded troop train, destination unknown. The Stage Door Canteen and Hollywood canteen, where celebrities offered food, dancing, and entertainment to servicemen were well known. But the real surprise came at train stations all across the country, such as North Platte, Nebraska, Dennison, Ohio, Reno, Nevada, and Connellsville, Pennsylvania, where local women, children, and senior citizens sacrificed their own food and ration stamps to provide a morale boost to hungry, homesick, and frightened soldiers. Learn how the Greatest Generation pulled together to help our troops.

The program will cover many areas of women’s history that are not well known, as well as look at North Platte and other railroad station canteens during World War II. The presentation is open to all museum visitors on the 21st at no extra charge. Museum admission includes rides on trains in the museum’s collection that were used to transport people during World War II.

For more information on The Whistle Stop Canteen, see www.barbwarnerdeane.com

Your ticket for the: Historic program to be held at IRM September 21st