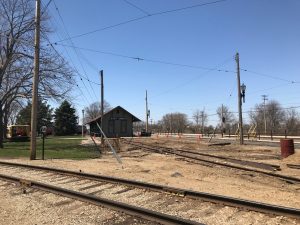 The former site of four railroad cars containing the IRM gift shop and bookstore, just to the east of the museum’s East Union Depot, has been substantially cleared. The work was done by the museum’s Buildings & Grounds and Track Departments and involved removal of the railroad cars via a temporary connection to the streetcar line. The deck, ramps, and steps leading to these cars were also removed by museum workers. The site will remain clear for the time being until a decision is made for a permanent use for this site.

The change follows the relocation of the museum gift shop and bookstore from this location to the Schroeder Mercantile Store, located on the museum’s Main Street scene west of 50th Avenue ‘L’ station. The Schroeder building, an historic store originally located in nearby Union, was completely restored by IRM and opened to the public in November 2017.

Your ticket for the: Former gift shop site east of the depot cleared