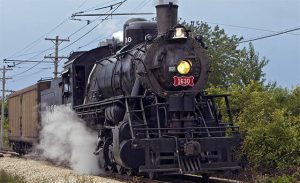 On Saturday, September 15th, the Illinois Railway Museum will be celebrating the 100th birthday of its most famous steam engine, Frisco 1630. This “Russian Decapod” was constructed by Baldwin in 1918 for export to Imperial Russia but was kept in the United States following the Bolshevik Revolution. It ended up serving with the St Louis-San Francisco Railroad, or Frisco, and later a mining company in Oklahoma before coming to IRM in 1967. For more than four decades it as been one of the museum’s most popular, and most enduring, symbols.

The celebration will take place during the museum’s annual Museum Showcase Weekend. The engine itself will blow out 100 candles on a specially-made birthday cake on Saturday afternoon.

Other attractions planned during Showcase Weekend include operation of the Nebraska Zephyr, the museum’s famous 1930s streamliner; a caboose train; historic electric cars including the museum’s oldest operating piece of equipment, 1898-built elevated car 24; and trolley buses. Memberships good through 2019 will go on sale on the 15th and there will be a dinner open to museum members. For more information on planned operations and hours see www.irm.org/event/museum-showcase-weekend.