TicketsDonate Membership
IRM is open Sundays in April. Our plans for 2021 →

The Illinois Railway Museum (IRM) is pleased to announce that it has acquired an electric interurban railway car built in 1920 for the Chicago North Shore & Milwaukee, or North Shore Line. This car, number 172, carried passengers daily between Chicago and Milwaukee until the North Shore went out of business in 1963. The car has been stored in Indiana since 1963.

Car 172 is an example of a steel-bodied interurban railway coach of a type that was common in the Midwest before automobile ownership became popular. It was built by the Cincinnati Car Company and featured a varnished mahogany interior, electric motors and control designed for high-speed operation, coal-fired heat, and cast-glass decorative windows. At the time it was built the North Shore Line had just extended its train operations into downtown Chicago, using the North Side elevated – now the Red and Purple Lines of the CTA – to carry passengers directly into the Loop. This service was made possibly by coaches like car 172.

After World War II, ridership on the North Shore Line dropped off as more people purchased cars and expressways made intercity travel faster. The railroad went out of business in 1963 and car 172 was sold to former North Shore Line employee John Horachek who moved the car to storage in Indiana. Starting in the late 1960s it was stored at the Indiana Transportation Museum (ITM) in Noblesville, north of Indianapolis, where it was occasionally operated for the public to ride.

Car 172 was retired from use in the 1990s and since that time it has been kept in a storage barn at ITM. When that organization was evicted from its site in Noblesville in mid-2018, Mr Horachek donated car 172 to IRM. On December 7th it arrived at the IRM site in Union, McHenry County, where it joins the largest collection of preserved North Shore Line railway cars in the country. Car 172 is unique among the existing North Shore Line cars as the only example dating to 1920 and it is a rare example with its original mahogany interior intact and unchanged. The museum’s intention is to rehabilitate the car and operate it for the benefit of museum visitors. 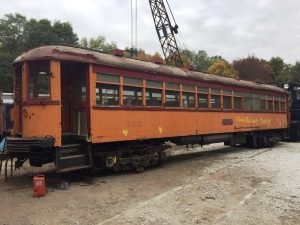 Your ticket for the: Historic 1920 interurban car returns home to Illinois