The Illinois Railway Museum has been awarded a grant of $25,000 by the John H. Emery Rail Heritage Trust. This grant, which follows an initial grant awarded in early 2019, funds the second part of a major rehabilitation and stabilization program concentrating on the museum’s network of overhead trolley wire and associated infrastructure. IRM has more track under 600 volt trolley wire than any other museum in the country, some nine miles altogether, and this network requires significant maintenance work.

The awarding of this grant permits the museum to undertake an extensive program to remove and replace line poles that were identified during an assessment conducted last year. That assessment of the condition of the museum’s overhead wire infrastructure was covered under the grant received in 2019 from the John H. Emery Rail Heritage Trust. Other work that was performed using funding from the 2019 grant included treatment and bracing of numerous line poles to prolong their lives. Following the awarding of this new $25,000 grant, the museum intends to commence with the pole replacement program as soon as weather and circumstances permit.

The John H. Emery Rail Heritage Trust was established by John Emery, a longtime Chicago resident and avid rail enthusiast, for the purpose of helping to preserve rail equipment and infrastructure from the “Golden Age” of rail travel in the mid-20th century. IRM is one of 18 different organizations to have received a grant from the Trust in 2020, with a total of some $300,000 being awarded altogether. The members and volunteers of IRM wish to extend their gratitude to the Trust for its support of the museum’s preservation activities. More information on the Trust may be found at emeryrailheritagetrust.org 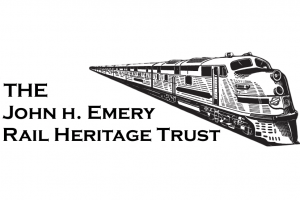