TicketsDonate Membership
The museum is open every day. 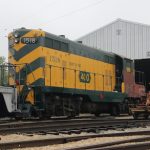 Chicago & North Western 1518 is the first GP-series (General Purpose) locomotive, or “Geep,” ever built. It was constructed at the EMD plant in LaGrange as prototype, or demonstrator, number 922 and was later sold to the C&NW. It is the forerunner of some 17,000 “Geeps” to be built between 1948 and 2001. It was restored by the C&NW to its 1950s appearance and donated to IRM in 1986.

COMPARE ME WITH: Chicago & North Western 411, an F7A locomotive built at about the same time and also originally a freight locomotive. The “Geep” was a design known as a “road switcher,” more utilitarian than streamlined “cab units” like 411 but with far better visibility and easier maintenance due to better access to internal components.

Your ticket for the: Chicago & North Western 1518