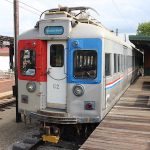 Chicago Transit Authority 52 is an articulated, aluminum-bodied three-car PCC type ‘L’ train. Designed by Chicago Rapid Transit just prior to the advent of the CTA, it was part of the 5000-series before it was renumbered. Only four of these cars were built for Chicago but they saw limited success and in later years were used on the Skokie Swift, now the Yellow Line.

FUN FACT: For the Bicentennial, car 52 was repainted in a bright red, white, and blue livery and given the name “Paul Revere.” It was also temporarily given a new number, ’75, making it the only CTA car to ever bear a number with an apostrophe.

COMPARE ME WITH: Chicago Transit Authority 6125, an example of the first type of ‘L’ cars built following the four 5000-series cars. The 6000-series eschewed the articulation of the 5000s but did keep the multi-car concept, using permanently coupled pairs of ‘L’ cars on standard pairs of trucks.

Your ticket for the: Chicago Transit Authority 52