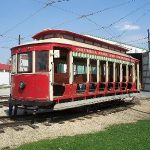 The only single-truck open car at IRM is Cooperativa de Transportes Urbanos y Sub-Urbanos 19, a car from Veracruz, Mexico. Open cars like 19 were extremely popular in the United States in the 1890s and early 1900s but they fell out of favor around World War I because they could only be utilized by the street railway for half the year. During the winter they just had to be stored. In Mexico, with a milder climate, open cars could be used year round and car 19 remained in service in Veracruz into the early 1960s. It was acquired by IRM in 2009 and is in operation.

FUN FACT: We aren’t entirely sure of car 19’s history. Brill built 18 open cars for Veracruz in 1914 and numbered them 1-18. What we think is that car 19 was assembled in the Veracruz streetcar shops from parts of other 1914-built Brill open cars, perhaps ones that had been partly wrecked. One clue that car 19 was cobbled together: if you look under the seats, you’ll notice the seat supports aren’t made from factory-made castings but rather from lengths of steel rebar – the stuff used to reinforce concrete!

Your ticket for the: Cooperativa de Transportes Urbanos y Sub-Urbanos 19