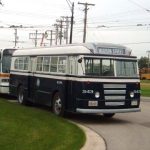 Montebello, California, is a suburb of Los Angeles, located just east of the city in the San Gabriel Valley. Agriculture played the largest role in Montebello’s history, until the discovery of oil in 1917. Montebello Bus Lines, established by the city government, still operates 66 buses over routes extending through 14 suburbs and running into downtown Los Angeles.

Before World War II, many manufacturers built their own designs of buses, often in small quantities. One of the more successful was the Ford Motor Co. Its “Ford Transit Bus” line, seating only 27 people in the standard body, was built in various configurations from 1936 to 1947. Ford produced the chassis and bought the body from the Union City Body Co. in Union City, Indiana. Buses built after 1939 were equipped with Ford’s flathead 239 cubic inch V8 gasoline-fueled engine, producing 95 horsepower and located in the rear. All were equipped with a three-speed manual transmission. In total, about 13,700 Ford Transit Buses were built, but operating examples are very rare today.

The Chicago & West Towns Railway operated electric streetcars and motor buses in the western and southwestern suburbs of Chicago. C&WT began operating buses in 1923, and soon was running more buses than streetcars to save the expense of track infrastructure in less populated areas. Bus 17 was painted as a fictitious “C&WT 343” to illustrate the type of vehicle used by this railway.

Bus 17 was acquired in 1989 from the Orange Empire Railway Museum. It is complete and operable.

Your ticket for the: Montebello Bus Lines 17