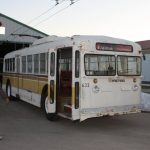 San Francisco’s cable cars (streetcars pulled by a constantly moving cable beneath the street) are legendary. But hilly Seattle also had a cable car system, and was the last American city to abandon their use, in 1940. Recognizing the trolley bus’s ability to climb hills easily, it was chosen as the primary mode to replace Seattle’s cable and electric street cars. They placed two orders, one to a local firm for trolley buses to a Brill design, and another for 135 vehicles from Twin Coach in Kent, Ohio. Twin supplied their streamlined GWFT model with Westinghouse electrical equipment. During WWII, Twin and Pullman-Standard built additional coaches for Seattle.

Our bus was built as number 865 in June, 1940. It was renumbered to 626 in 1963, and it served the city-owned Seattle Transit System until March, 1965. During the mid-1960s, Seattle Transit’s policy was to gradually abandon the trolley bus system, but strong public opinion against the policy, primarily for environmental and economic reasons, led to its reversal in the early-mid 1970s. When our bus was retired, it was preserved at the Oregon Electric Railway Society in Glenwood, Oregon. The transit system, absorbed into the new Municipality of Metropolitan Seattle, rebuilt what remained of the trolley bus fleet and even re-acquired four older units that had been sent to museums, including our bus. Rebuilt and renumbered 633 in 1974, it served until the entire trolley bus infrastructure was to be rebuilt during 1978. During the shutdown, a fleet of replacement trolley buses was ordered, but only a few were ready when the system re-opened in September, 1979. Our bus resumed service a third time, running in limited service until 1981. After its third retirement, it was preserved at the Orange Empire Railway Museum in Perris, California, and came to IRM in 2009. It is complete and operates occasionally on our demonstration line.

Your ticket for the: Municipality of Metropolitan Seattle 633