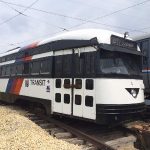 New Jersey Transit 4 is a typical postwar PCC streamlined streetcar. It originally ran for Twin City Rapid Transit and operated in Minneapolis and St. Paul until that streetcar system was closed in 1953. Car 4 then went to Newark, New Jersey where it entered service on that city’s subway/surface transit system. It remained in service until August 2001, when modern light rail vehicles replaced the PCC cars in Newark. The car is complete but unrestored.

FUN FACT: Car 4 is the only American streetcar at IRM that operated into the 21st century in normal daily service.

COMPARE ME TO: Greater Cleveland Regional Transit Authority 63, an identical PCC which was built for Twin City Rapid Transit but was sold to Cleveland instead of Newark in the 1950s. The different changes made to the two cars during their service lives include different doors, interior fixtures, window treatments, and paint jobs.

Your ticket for the: New Jersey Transit 4