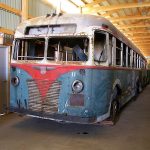 The cities of Waukegan and North Chicago, Illinois, were served by streetcars for their local transit needs beginning in 1895. The streetcar system was owned by the North Shore Line, which operated an important electric interurban line linking Chicago and Milwaukee. (See Chicago & Milwaukee Electric car 354, also in IRM’s collection, for one of the streetcars which ran in Waukegan.)

By the mid-1930s, expansion of service, and replacement of streetcars on routes where the tracks were wearing out, was achieved by buying motor buses. Bus 11 was one of three units, bought on NSL’s third bus order. ACF Motors, which owned the J. G. Brill Company (formerly the largest streetcar builder in the country), built the buses in Brill’s Philadelphia plant. This bus was the 273rd of 425 built of this model. It has a Hall-Scott model 130 engine mounted under the floor; this 425 cubic inch, 6 cylinder gasoline-fueled engine produces 124 horsepower.

Bus 11 was operated by the North Shore Line until 1947, when streetcar service ended. In that year, NSL created a subsidiary company, Waukegan-North Chicago Transit, to operate the local bus system. When NSL went out of business in 1963, WNCT became an independent company. Bus service continued under the Regional Transit Authority, and today Pace operates the lines. Bus 11 was used for Omnibus Society of America excursions in October 1961 and September 1962, just before it was retired. Although in rough shape from outdoor storage, it is restorable and substantially complete.

Your ticket for the: Waukegan-North Chicago Transit 11