The Illinois Railway Museum (IRM) has acquired a rare 36′ billboard meat refrigerator car. At one time, “reefers” like this were a common sight on American railroads, transporting perishable products from coast to coast. Brightly painted advertisements touted the products they carried, from beer to butter to bacon. Kingan and Company of Indianapolis was one of the largest meat packers in the world and had a sizeable fleet of reefers to transport their products. This car, Kingan (KRLX) 943, was part of a group of wooden reefers built by American Car and Foundry in 1910. It was constructed at the AC&F plant in Chicago, on Blue Island Avenue near Ashland, and operated throughout the country transporting Kingan’s products until the mid-1930’s. At this time, car 943 was retired and placed in a warehouse in Indianapolis as document storage, where it remained for the next 75 years.

When the warehouse was demolished in 2014, car 943 was saved and moved to Kirklin, IN. The car is a body only, but in remarkable condition thanks to its years inside the warehouse. The billboard advertising is even still visible, touting a major product sold by Kingan: Reliable Sliced Bacon. The car is significant as it is a full generation older than the other refrigerator cars in the IRM collection. It is also one of a very few genuine billboard cars known to exist, as billboard advertising on railroad cars was outlawed in the early 1930s. The museum’s intention is to restore the car for display and potential operation on IRM’s demonstration railroad. To help support freight car restoration at IRM, click here.

IRM would like to thank Randy Weaver of Carmel Engineering, whose property the car resides on, for donating the car to IRM. The car arrived at IRM on June 19, 2021. 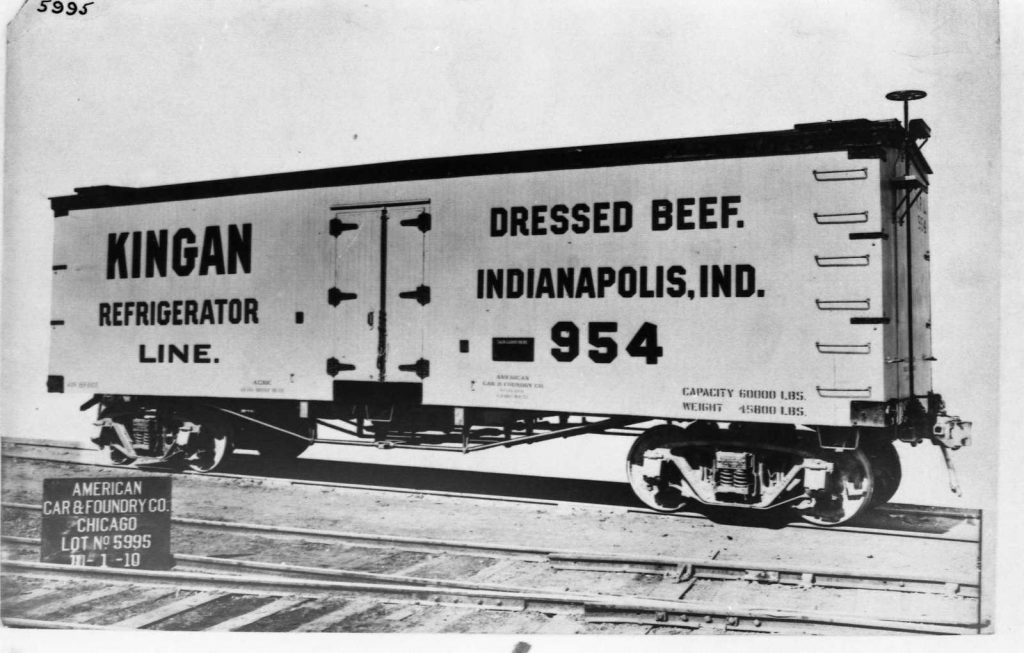 Your ticket for the: IRM Brings Home the Bacon